The Story Behind the Image

Please enjoy my series of short articles where  I share with you the approach and the technique that went into making selected images from my portfolio. I hope you enjoy! 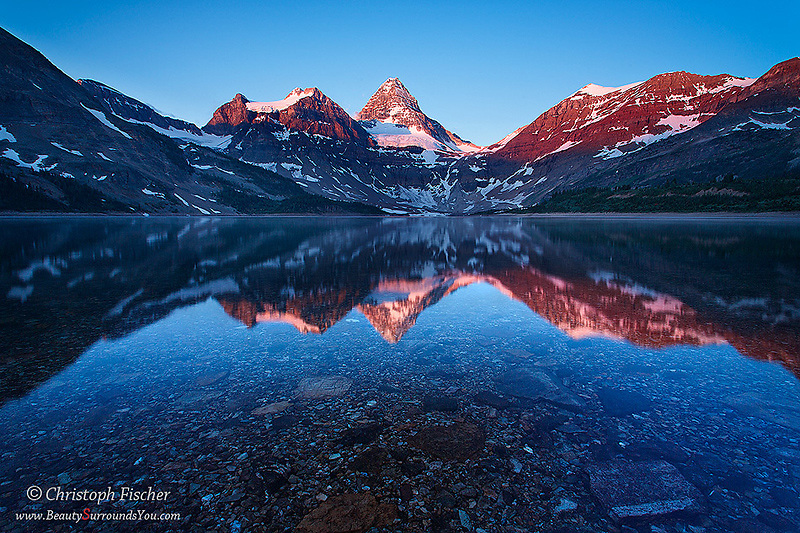 Mount Assiniboine in the Canadian Rockies is one of the most symmetrical mountains I have seen. I arrived well before sunrise at lake Magog, at the base of Assiniboine, in the hope of capturing that intense red of the Alpen Glow on the peaks, which would occur shortly before the mountain was illuminated directly by the rising sun. In order to capture the reflections, the lake’s surface would have to be still, and I struggled with the seemingly incessant winds which rippled the surface. However, occasionally, the wind would die down sufficiently, for the surface of the lake to be near still, and I made sure I would be able to capture the short lived moment before it was too late. I loved the pebbles and rocks on the lake floor, and I took two images. One image with the polarizer turned to cut through the reflections, so that the stones could show through, and another without polarizer, to capture those beautiful reflections of Mount Assiniboine. I then combined the two images in such a way that the viewer can see both the reflections of Assiniboine and the rocks clearly showing through. I also used a Neutral Density Filter which I knew would accentuate the reds of the early morning Alpen Glow. Canon 5D III, 17 mm, f/16, ISO 100, 3.2 s. 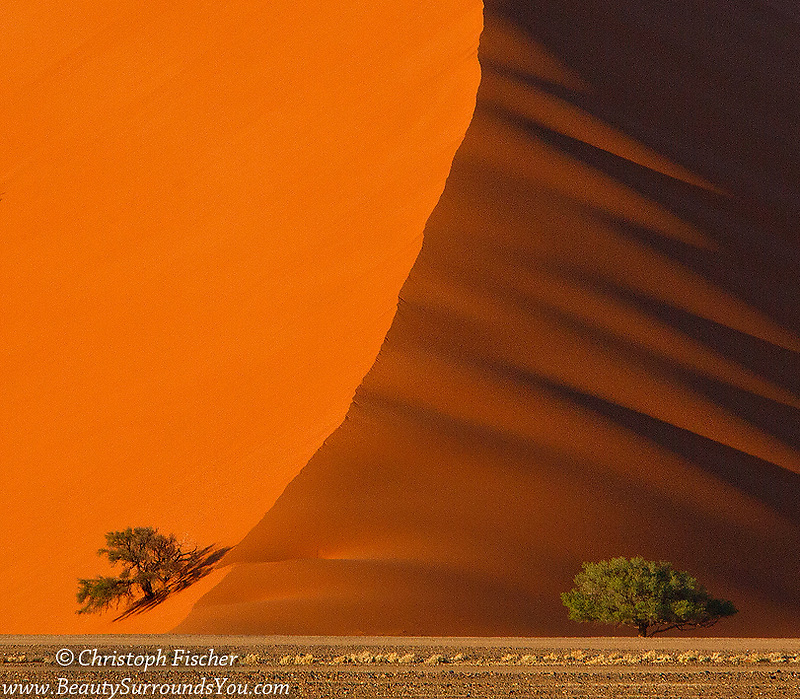 When photographing dunes, the magic happens at the base, where textures, shapes and patterns can play together in the most compelling manner. I used a telephoto lens to capture the base of this particular red dune, which forms part of the world famous Sossusvlei region in Namibia, home to some of the world’s highest and most beautiful dunes. A telephoto lens is particularly well suited for capturing scenes such as this, since it compresses the horizontal separation of elements, eliminates a sense of depth, and thereby allows their shapes, patterns and textures to interact most effectively. This was also the case here, with the interplay of the sharp ridge line of the dune, the light and ripples on the side of the dune and the trees at its base. I have always been amazed by these trees, since the many times I have revisited this area over the years, they never are swallowed by the enormous dune towering right above them. Canon 5D III, 280 mm, f/11, ISO 500, 1/320 s. 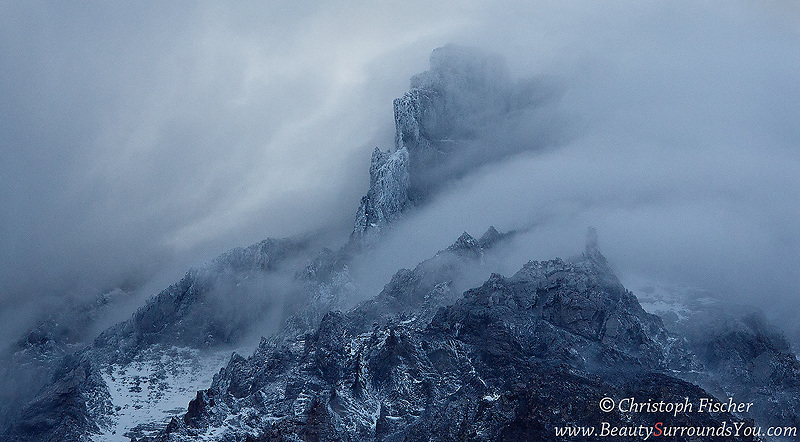 A moment of unforgettable drama and beauty, which appeared ever so fleetingly at the very peak of Paine Grande, the highest mountain in Chile’s Torres del Paine national park. During my recent photography workshop in Patagonia, my workshop participants and I took a boat ride to photograph beautiful Glacier Grey in the early morning light. It turned out to be a windy, stormy day and when we ventured out on the deck of the moving boat, we were be buffeted by winds and pelted by sleet and rain. It was very tempting to remain in the warm interior of the boat, and enjoy a coffee or hot chocolate but, as this image portrays, venturing out there, no matter how bad the weather, can pay off greatly. When photographing mountains, one should never forget the infinite photographic possibilities seemingly hidden in the peaks and the mountain sides. It is not all about wide angle perspectives, with an interesting foreground element, such as reflections on a lake or an intriguing rock formation, and the mountains in the background. Sure, great images can be captured this way, but if that is the only thing you do, you will miss out greatly. The telephoto lens is extremely powerful for finding and capturing the immense drama and beauty that plays out high above. Canon 5D III, 150 mm, f/8, ISO 800, 1/1000 s, hand held. 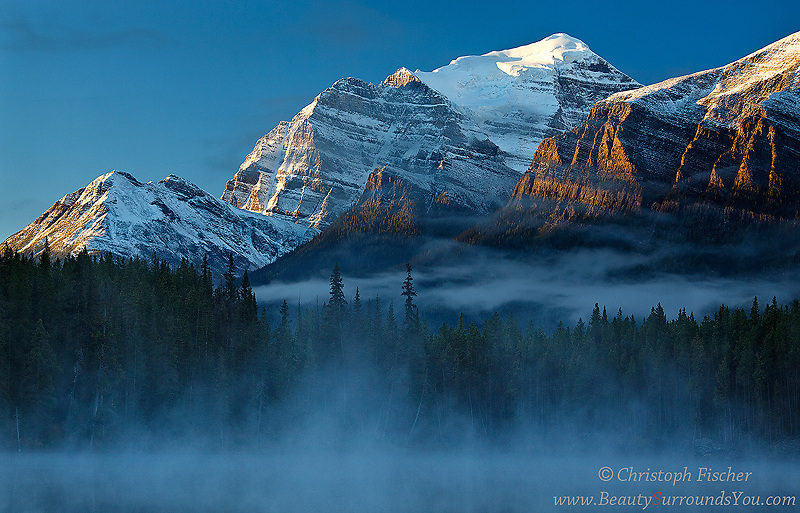 Landscape photography requires patience, persistence, stamina and every now and then you will be rewarded greatly. There often will be times when you return home, frustrated and depressed, with nothing to show, but if you hang in there, and revisit in the hope that maybe, just maybe, the light and conditions will be right, your efforts will pay off! During our 2017 Canadian Rockies photography workshop, my group and I set out in the very early mornings in the hope of capturing that special moment, when it all comes together. We often had to fight the clouds, which often seemed to hide it all from view. We had passed by this particular lake many times and this morning all the elements worked together. The clouds cleared just in time for the morning light to touch the beautifully shaped mountains, and the mist coming off the calm waters partially shrouded the trees on the distant shoreline. I chose to use a telephoto, rather than the wide angle, since to me it was all about the mist, the trees and those stunning mountains. Had I used a wide angle, all the beauty that was happening in the distance would have been lost in the image. Canon 5D III, 100 mm, f/9, ISO 320, 1/30 s. 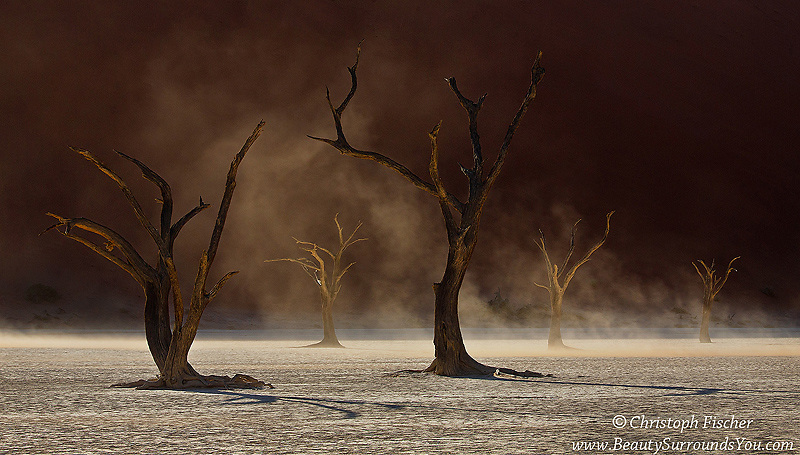 When conditions are out of the ordinary, when the odds seem stacked against you, you will be surprised by what unique, compelling opportunities they can afford you. This counts as one of my favourite images, and it only could happen during the windy conditions my Namibia photography workshop group had to endure when we visited the famous dead trees in Sossusvlei, a world famous region of towering red dunes, in Namibia, Africa. We had left our beautiful eco lodge early in the morning to capture the trees against the dunes painted red by the rising sun. It was a great morning but, about 90 minutes after sunrise, the winds picked up. I suggested to my group that we photograph this particularly beautiful arrangement of dead trees, whose trunks seemed to glow in the light reflected off the bright floor. We got ready to photograph, when the winds increased and blew dust across the valley. I noticed the potential and told my group, in what I was told later was a very animated manner :), to start firing off shots before it all ended. The dust not only partially shrouded the trees, but the light reflected off the dust gave the trees the most amazing glow. What an incredible moment, and we were so fortunate to be in the right place at the right time. If we had left because of the wind, we would have missed out on it all! Canon 5D III, 85 mm, f/14, ISO 500, 1/125s, hand held. 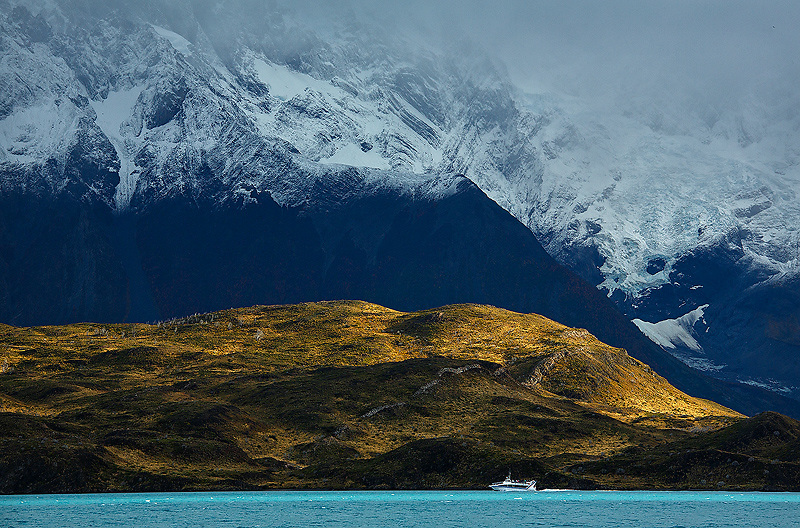 One of those magnificent moments in Patagonia’s Torres del Paine, when it all came together! During my recent photography workshop in Patagonia, my workshop participants and I photographed the stunning turquoise waters of Lago Pehoe in Chile’s Torres del Paine National Park, which were being illuminated by the sun. To our delight, the sun also dressed the foothills in warm spot light, which contrasted beautifully against the backdrop of the base of towering and ominous Mount Paine Grande, itself slowly unveiled by the clearing clouds. To top it all off, a boat full of admiring travelers crossed right in front and provided the whole scene with a much needed sense of scale. I suggested to my group that we use a telephoto lens to bring out the amazing layers of turquoise waters, spotlit foothills and towering Mount Paine Grande, and to most effectively convey the scale of it all. As you can see, I did not include the top of the mountain, in order to emphasize the layered textures and colors. Often one can use the mountain face itself as an effective, textured background and there is no need to include the peaks. Canon 5D III, 144 mm, f/13, ISO 250, 1/100 s, hand held. 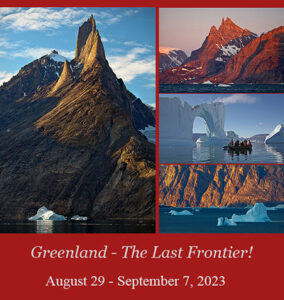 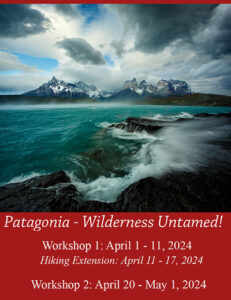 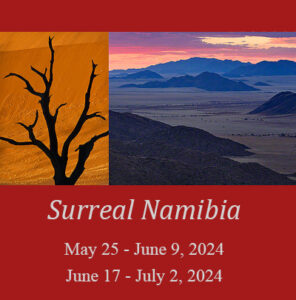